If you ask anybody from Spain about Galicia, the first thing that will come to their mind is the words: FOOD and SEAFOOD.

In Santiago you will be able to try many different kinds of traditional Galician dishes. The quality of Galician seafood is recognized internationally. For this reason, in Santiago de Compostela you will be able to eat very fresh seafood with an exceptional taste. As a result, Santiago and Galicia are a paradise for seafood and fish lovers.

The Vieiras (scallops), symbol of the Camino and carried by many pilgrims

along the walk, are another of the traditional dishes that you will be able to try in Santiago. Also, you will be able to try their Pulpo a la Gallega (Galician octopus also called Pulpo a Feira), probably the most representative dish in Galicia. Moreover, you can not miss their oysters, crabs, barnacles, shrimps, prawns, lobster.

Other popular dishes and traditional from Galicia are:
– El Caldo Gallego (Galician Soup): (VERY GOOD!!) made with a typical

vegetable from Galicia called Grelo (Similar to Chard)and boiled potatos, also, there are some pieces of Chorizo and some beans (not many of them).
– Empanada Gallega, another very popular galician dish. Some people call it the Galician Pizza, even

though the taste is completly different. Its bread crust covers the bottom and the top of it, and they are filled with diferent ingredients: the most
common one is the tuna empanada (empanada de bonito), mixed with peppers, onion and other vegetables.
– Tarta de Santiago: There are many traditional sweets, but the most remarkable in Santiago is the tarta de Santiago, cake made of almonds. 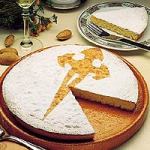 The most popular wines are:
– Albariño, delicious young white and one of the best in Spain to combine with fish.
– Ribeiro, white or red. Young and light, that is generally drunk in mugs instead of cups.
– Other good wines of the area are: Fefiñanes, Betanzos, Rosal, Valdeorras, Ulla y Amandi, all of them are good complements of the amazing Galician cuisine.

As a Galician native, I strongly recommend the Galcian Soup and the empanada previously mentioned, and I also have to mention the traditional peppers from Galicia and the bread:
– Pimientos de Padron, “some are spicy, some are not”. They are small

green peppers that we deep frie until they get a golden colour and we add salt on them before eating them.
– Galician bread: If you are a bread lover, you can not leave Galcia without trying their handmade bread. There are different kinds, but they all have a round shape and some have a hole in the middle (like a big donut) and some are just very big buns. They are covered with flower, and they generally last for some days, before they get bad. They are very spongy in the inside and tasty crust on the outside.

Continue reading WHERE TO EAT IN SANTIAGO

10 thoughts on “What to eat in Santiago de Compostela”