The Pamplona festival – also known as the San Fermin Festival or Sanfermines– is held in PAMPLONA every year from July 6-14. The most famous part of the festival is the bull run or ‘encierro’ when 15 bulls charge through the streets of the old city. Although the festival begins on July 6, the bulls do not run until July 7 and then run for 7 consecutive mornings. While referred to as “bulls” of the 15 animals running only 6 are wild bulls while the other 9 are steers familiar with the 0.51 mile course (825 meters). Six tame steers run with six aggressive black bulls to minimize injury to both animals and runners. Another 3 steers are released a minute after the first group to herd any of the wild bulls that may have been separated from the herd… 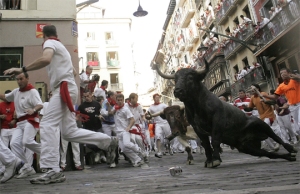 Thousands of people come over to Pamplona every year just to watch the spectacle of the bulls running through the narrow streets. This bull run in Pamplona is the most popular, but also the crowded one. Unless you are on a balcony, you won’t see the run as there are too many people crowding the route. You need to reserve a private balcony to see the run. But not worries! Actually there is a bull running almost in every single village of Navarre. In fact, in these small villages the spectacle can be as genuine as in Pamplona. Here you have the most famous bull running in Navarre:

ESTELLA-LIZARRA. This town is known by many pilgrims because of its famous fountain of wine. Estella is on the Camino and its festivities are celebrated from 2 to 8  August.

TAFALLA. This village is located 30 km south of Pamplona. A key date in the town’s diary is the month of August (from 14 to 20), when its festivities take place. They are well-known thanks to their bull runs and bullfights. 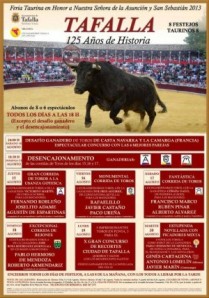 TUDELA. This town is 90 km away from Pamplona. Tudela´s festivities are celebrated from 24 to 30 July.

FALCES. The Bull run of Falces is after Pamplona’s the most popular one in Spain. The ‘Pilón’ bull run in Falces takes place at 9 a.m. every morning of the festivities in honour of the Virgin Mary of Nieva (9 days after the penultimate Sunday in August). Steers, young men and the hillside become the protagonists of one of the most curious bull events in Navarre. An 800-metre routes runs down a narrow and steep path down to the town. On one side is the ‘wall’ of the hillside, with a gully on the other side. The result: a scenario of a spectacular nature that adds strong emotion to the event.